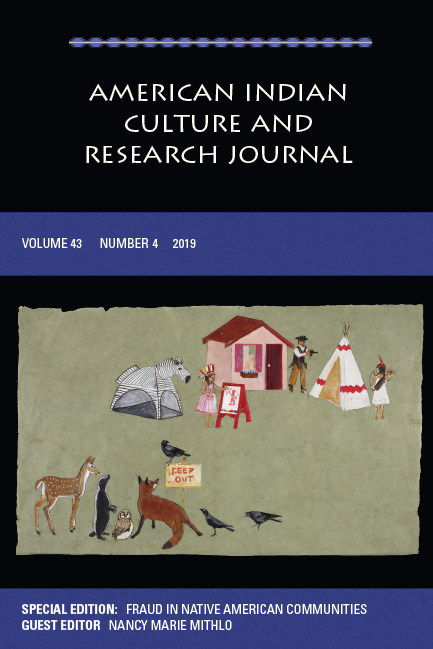 Illustration: Julie Buffalohead, Seems You have to Play Indian to be Indian, 2010, Mixed media on Paper. Courtesy of the artist. To purchase the journal: American Indian Culture and Research Journal

The commercial, ethical, political, and social impacts of purposeful deception in academic and creative arts endeavors have resulted in multiple harms to Native communities. While discussions about “faux Indians” are numerous, writing on this topic is rare. This volume features academics and practitioners debating the phenomenon of fraud from a variety of disciplines, including dance, children’s literature, fine arts, art history, anthropology, visual culture studies, poetry, museum studies, and American Indian activism. These authors, Native and non-Native, are committed to creating a space for discussion of misrepresentation in American Indian communities, with an emphasis on the adoption of Native identities in the arts.

At the Center of the Controversy: Confronting Ethnic Fraud in the Arts
Ashley Holland

Walk-Through at the Hammer
James Luna

What Shall We Do with the Bodies? Reconsidering the Archive in the Aftermath of Fraud
Mario A. Caro

The Artist Knows Best: The De-Professionalism of a Profession
Nancy Marie Mithlo

Aspirational Descent and the Creation of Family Lore: Race Shifting in the Northeast
Darryl Leroux

Closing the Gap: Ethics and the Law in the Exhibition of Contemporary
Native Art
Tahnee M. Ahtoneharjo-Growingthunder

Playing Indian, between Idealization and Vilification: Seems You have to
Play Indian to be Indian
Rosy Simas and Sam Aros Mitchell

In Defense of Wyam: Native–White Alliances and the Struggle for Celilo
Village. By Katrine Barber.
Jeffrey Ostler

Indians on the Move: Native American Mobility and Urbanization in the
Twentieth Century. By Douglas K. Miller.
Orit Tamir

Life of the Indigenous Mind: Vine Deloria Jr. and the Birth of the Red
Power Movement. By David Martinez.
April M. Bond

Making a Difference: My Fight for Native Rights and Social Justice. By Ada
Deer with Theda Perdue.
Cathy Carballeira

This Land Is Their Land: The Wampanoag Indians, Plymouth Colony, and
the Troubled History of Thanksgiving.